As a permaculture enthusiast and a believer in the possibility of sustainable living, I couldn't resist admiring this little island and its intriguing story, which I decided to share. 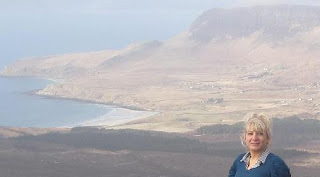 Having developed a fascination with the Scottish landscape and hill-climbing, I headed this Easter to the 'An sgurr' of Eigg so as to experience the marvel of reaching the clouds on foot and enjoying the wonderful scenery from the top. The distinctively-shaped hill - which was formed about 58 million years ago, is known as a touristic destination for its amazing geology. From the top, and as the weather was great, it was possible to see the surrounding islands such as Mull, Coll, Muck, Rùm, Skye and the Outer Hebrides. If you take the morning boat - which we did, you can get close to those islands or drop in any of them.

It's the community architecture, however, that impressed me the most. A little museum on the isle, tells you the intriguing story of this community. The island has been bought out by Isle of Eigg Heritage Trust who manages it on behalf of the community since 1997. The purchase was deemed necessary to get around the implications of a Law (that has been reformed afterward) under which the population of 100 people suffered instability, unemployment, lack of infrastructure and population decline. In addition to managing the island, its buildings and natural heritage, the Trust also runs the public services through subsidiary companies. Electricity on the island is from 100% renewables, and the island depends on tourism, agriculture, public services, construction and creative industries for its economy.

My friend, who is British, told me that's it's essential when visiting islands to buy local and 'give more than you take' in order to support the community.

It's an example of successful democratic management of resources through community participation and solidarity, and is, therefore, an interesting model of both permaculture and sustainable development - although the islanders themselves do not verbalise it as such.

It's worthy to note that each community has its specific architecture and thus its own dynamics of resilience but democracy, solidarity, and regenerative solutions are common features in sustainable designs.

Sustainable tourism can help this and other similar communities to flourish and contribute to the progress of the bigger community of Britain and the world.