Intervention: The Impact of New Businesses & Technologies - The 6th meeting of the KCI - UNFCCC 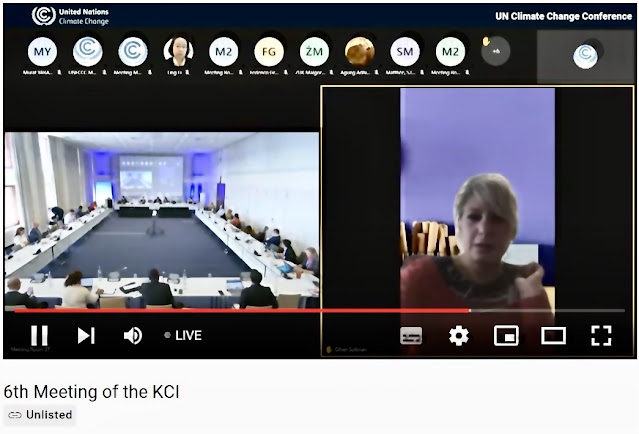 Intervention: The Impact of New Businesses & Technologies - The 6th meeting of the Katowice Committee on the Impacts of the Implementation of Response Measures

My Name is Gihan Soliman, from the International-Curricula Educators Association with the WMG.

1- In discussing new technologies, it’s important to research their impact on people with multiple intersecting vulnerabilities, yet a heightened co-benefits to people and the environment, such as indigenous women in developing countries (I can give an example of this if time permits). Technology is mediated by the socio-economics of Neoliberalism and therefore has the effect of intensifying inequality among people and nations.

2- We discuss AI in an instrumental sense; as a tool, but we’ve been warned by great scientists, such as Steven Hawking, against AI dominating our socioeconomics and gaining independence from the human purpose. I suggest that this research element be advanced in any study of the impact of new technologies on response measures.

A strong example of this is the indigenous women of the Salar Uyuni in Bolivia whose, livelihood, low-profile (but nature-preserving) technology, and ecosystems are threatened by lithium mining critically linked to some response measures such as increasing the efficiency of electric vehicles, for instance.

Recommendation: Make sure the language reflects the need to focus on people with multiple vulnerabilities and heightened environmental co-benefits. Taxation of automation is one way to support those communities as the world continues to reap benefits from their unpaid environmental roles/services in protecting soils and the atmosphere. Additionally, more funding for research on knowledge-transfer pros and cons, balances and checks, and the role of women in community development is very much welcome.

[Due to time limitations, only text in black were read]
Posted by Gihan Soliman at 1:08 PM No comments:

WMG STATEMENT at the 7th Multi-stakeholder Forum on Science, Technology and Innovation for SDGs

7th Multi-stakeholder Forum on Science, Technology and Innovation for the Sustainable Development Goals

Special Event 3: Supporting national capacities and the Partnership in Action for STI4SDG roadmaps
SPECIAL EVENT
12:15 PM-1:15 PM
[STATEMENT}
WMG Statement
Gihan Soliman, BA, PGCE, MSc, RSci, Soil Sci
International-Curricula Educators Association
Presented at the 7th Multi-stakeholder Forum on Science, Technology and Innovation for the Sustainable Development Goals
www.icea-global.org
03/05/22
As we look forward to fully recover from COVID 19; thanks to the advances in science, technology, and innovation (STI), we also worry about the injustice STI brings to the table. Technology has surely enhanced human performance to an unprecedented level yet intensified inequality among individuals and nations. The pandemic exposed such paradoxes in the uneven distribution of vaccine and medication, for one. In fact, the year 2021, witnessed three STI paradigm shifts in the human history, introducing boundless opportunities as well as fears for the future beyond Covid 19; 1) the STI-triggered emergence of a self-replicating xenobot [1], 2) the ‘Human Augmentation’ thinkpiece [2] published by the UK Defence and Military, accepting that technology is a form of evolutionary Selection resulting in an ‘augmented’ existence of the human kind comprising physical, biological as well as socioeconomic dimensions [3][4][5]; 3) and finally, the issuance of the first 1-12 AI curriculum by the UNESCO [6], marking a significant adjustment of the educational system to accommodate our relationship to machines. Despite the improved overall capacity [7], our interaction with technology is generally mediated by a global economic system deeply rooted in Neoliberalism: cut-throat competition and inequality among people, genders, age-groups, and nations. Responses [8] include, but not limited to, a) Transformative education and interdisciplinary research, assessing the environmental and socioeconomic implications of the ever-evolving human-machine symbiosis; b) Media literacy (and indeed democracy). c) Incentivising STIs solutions that boost synergies among people, species, genders, and nations and empowering indigenous women, in harmony with the dynamics of nature. d) Weighing opportunities against risks as we evaluate nature-based solutions against massive-scale industrialisation and reliance on automation. Without systemic change and active involvement of all stakeholders, structural inequalities and human rights violations will continue to shape our post-pandemic world.
Full document and Reference List
Posted by Gihan Soliman at 1:49 PM No comments: 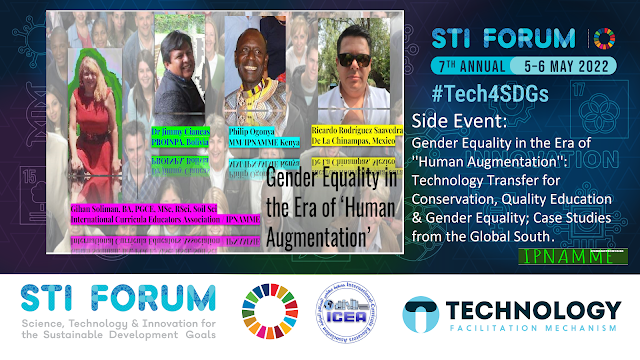 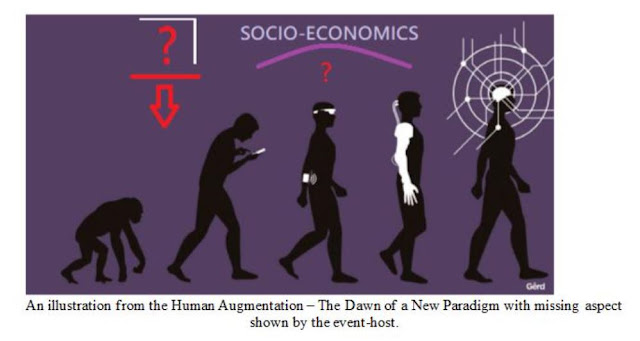 Technology has surely enhanced human performance to an unprecedented level. Technology may also have its downside in that it intensifies inequality among people, genders, species, and nations. The 'Human Augmentation: The Dawn of a New Paradigm' is a recent publication by the UK Ministry of Defence designed to set the foundations for more detailed research and development of Human Augmentation. Human Augmentation [1], also known as, the Human Enhancement or Human 2.0 is not in fact a new concept. What’s new, and indeed considered a paradigm shift, is that the publication accepts Human Augmentation as a form of evolutionary advancement in the Darwinian sense (as seen in the illustration). A concept that I presented back nine years ago in a form of an Open Letter to the IUCN World Congress 2014 proposing that ‘We Are NOT just another species’ [2] and that the correction of the human taxonomic identity is way overdue; that we are rather a highly-complex kingdom of life, so to speak, comprising a biological, physical, and socioeconomic entanglement that I called the Homocybernetica [3]. The issue with the Human Augmentation perspective, though, is that it reduces the evolutionary advancement in the human organisation to a matter of ‘size’ with an implication that enhancement is guaranteed. It also represents human beings as mere users of technology and subject to its modification, disregarding the fundamental distinction as the ‘innovator’ or the maker of technology and thus overlooking the role of communication and socio-economics, as well as justice and equality in this evolution. Such disregard is alarming because technology is generally mediated by a socio-economic system deeply rooted in inequality and competition and might, if not appropriately addressed, continue to intensify injustice among people, genders and species - and that is a recipe for failure in the long run. The more viable route is to focus on the unity of kind, the role of communication, and the mobilisation of energy into our organisation through social and eco-friendly innovation not necessarily as a moral choice but simply for survival. We need to remember that the first form of technology was ‘making a fire’ and the first form of mass technology was organic agriculture and that augmentation does not necessarily make us better, more adaptive, or more efficient as the expression and illustration imply. Two study cases from Mexico (De la Chinampas) and Bolivia (PROINPA) showed alternative technology integrated successfully into the community with other non-invasive forms of technology to enhance production, social solidarity, and resilience while preserving the environment and species.

[1] Human Augmentation – The Dawn of a New Paradigm. 2021.A think-piece designed to set the foundation for more detailed research and development on human augmentation. Ministry of Defence of the United Kingdom.

[3] G. Soliman. 2019.‘Cybernetic Recombination, on the Biology of Technology, Revisiting Linnaeus Kingdom Minerals’ in G.Soliman. 2022.The Cybernetic Animal & the Shortfall in Taxonomy.The Cybernetic Society.Available at https://cybsoc.org/?p=2206&fbclid=IwAR15hpQCu2bpGaaYULVsjjeDy3oklBA6YbZ6zksEOmi5QGXnTlNLuSuFlWA.Accessed on 03/05/22.

Posted by Gihan Soliman at 7:52 AM No comments: